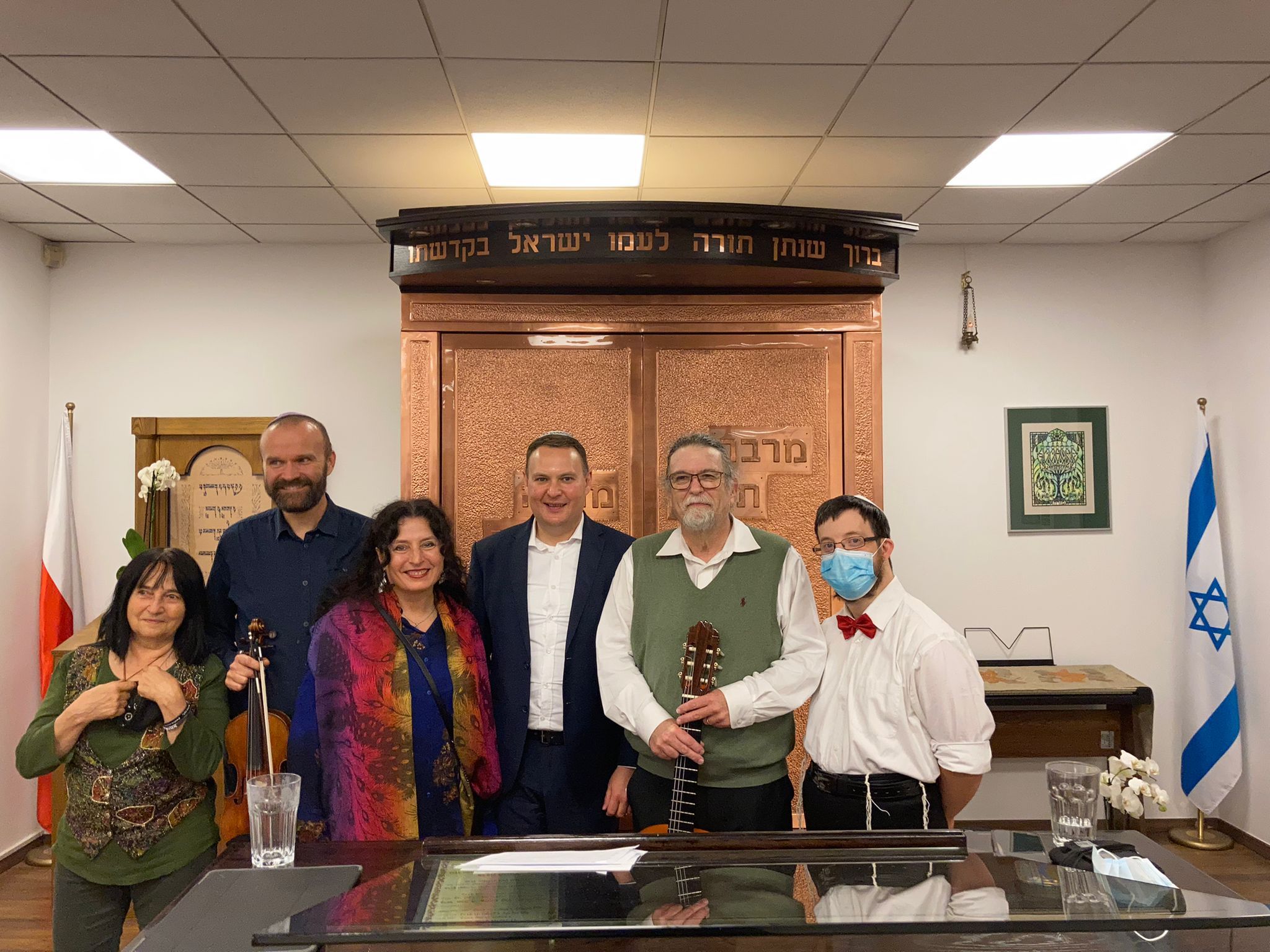 My first Shabbes in Warsaw got off to a flying start. Literally! I walked down the hotel's stairs to the lobby, did not correctly negotiate the last step, and flew onto the floor. Thank God I avoided broken bones. But I sprained my ankle, and it is swollen, a little painful, but mostly annoying. I was really enjoying walking—a lot!! So instead of walking to shul on my first Shabbat in Warsaw, I took an Uber to Masorti Centrum Ki Tov Synagogue. While in the Uber, Jared called me from his van, which had Jack and Jade inside, on their way to school—what a lovely way to start Shabbat and made me forget about the pain for just a little while. I gave everyone a Shabbat blessing, and it was a blessing for me.

The services were wonderful. The community leader, Joe Smoczynski invited me to lead whichever part I would care to, and his wife, Avigayl sang the rest. He also asked me "on the spot" to deliver a drasha. As part of my drash I said that we study every day, so we have something to share when this occurs. I talked about Avigayl leading the service in the place that Jews once thrived, and like the namesake of this week's parasha (Hayei Sarah), Avigayl is a pioneer in bringing Judaism back to Poland. Only this time, a woman is given the same opportunity as men to lead the prayers.

The next morning's service, I led the shaharit, read Torah, and delivered the drasha. It was on the most romantic piece of ancient literature ever written. Yitzhak is out in the field praying--could he have been praying that his new bride would be suitable for him? Meanwhile, Rivka spies Yitzhak in the field and is so overcome that she falls off her camel. I then went on to talk about the three daily services and that the mincha (afternoon service ) was instituted in honor of Yitzchak because he prayed in the field as the evening approached.

A Jewish doctor, Dinah, was there at the shul, and she examined my ankle, determining that it was not broken. Good news!! At the tisch, I taught againbut  did not have my shoes on since my foot and ankle were slathered in Voltarin cream, which promotes healing or less pain. Either way, it worked great, but I have never taught in shul with my leg up on a chair with no socks. We do what we need to do!

I heard several stories from people who found out that they were Jewish when they were adults. Taken in by Catholic families, these Jews grew up in the Catholic faith—but then things like photo albums come out of the closet to reveal a Jewish family. One of the people said that his father gave him a package when he was a teenager—inside was a tallit and a kippah. He didn't know what it was, and nothing was explained to him. It took years to get the truth out of his very reluctant parents that they were actually Jewish.

Then for havdallah, we went to Ec Chaim to bensch Havdallah and I performed a little concert in honor of their 11th  anniversary. I was joined by one of my students and a dear friend Marcin Krol who is a more than outstanding violinist. I also planned to be joined by the Masorti crowd, but there was a controversy about pandemic restrictions. But the program went on, and one day I pray that we will all sit at the table and work together to become stronger!

The concert was a huge success and the synagogue was completely full—every seat occupied. Afterward there was a reception, and it was beautiful to sit and talk to people who were part of that congregation. I also got to meet an extraordinary man, Jose Maria Florencio, a world-renowned conductor who came from Brazil and moved to Poland in the 80's. His list of accomplishments is awe-inspiring—you should google him. At Masorti Centrum Ki Tov I heard him singing in the congregation. I could have sat and just listened to him! His pronunciation was perfect, and his Judaic knowledge was evident. We talked both Friday night and Saturday, and then he was at the Saturday night concert. I was deeply honored that he enjoyed my singing and my teaching. I hope to continue to get to know this great man.
Today, Sunday, I rehearsed with a wonderful singer at the University of Warsaw, named Alexandra Idkowska. She will sing in Yiddish, Polish and Hebrew as Marcin and I accompany her on guitar, violin and harmony vocals. This concert will be in Zielona Gora, our next stop!